The “unbuilt” may be understood as something akin to Arjun Appadurai’s “imaginary” that harbors the potential to form new social realities that are envisioned by individuals or groups. A workshop stationed at the Byzantine Museum will aim to explore the” imaginary” dimension of inhabitation in the case of diasporic communities constituted across national borders, focusing on the agency of women. Populations today link themselves to wider constituencies of religious, ethnic or gender affiliation beyond national borders, and various diasporic public spheres become the crucibles of a postnational order. In fact, Saskia Sassen claims that it is precisely within the condition of globalization that disparate experiences of immigrant women acquire a “presence,” obtaining the potential for new cross-bordered collectivities to emerge. If homes, neighborhoods, cities, and nations have conventionally been spatial realms of identification and belonging, such relations are now becoming unstable, and new types of consciousness, realms of operation and allegiance are being sought.

We proposed a workshop and exhibition, complemented with lectures (possibly by Arjun Appadurai and Elif Shafak), investigating the mythographies of the quotidian in conditions of displacement, transience and deterritorialization that characterize an overwhelming number of people in the contemporary world, including Greece. Women have been conventionally associated with the domestic realm, however, through conditions of economic immigration they now find themselves occupying alienated and un-homely positions, often in homes where they do not belong, destined to inhabit the role of the “other.” Moreover, even “liberated” women or expatriates who willfully migrate without facing conditions of financial or political hardship often experience a rupture between what they consider an intimate home and the “non-spaces” of supermodernity that they transverse in their itinerant lives.

Our workshop aimed to form a community of women of various ages, classes and nationalities who have experienced displacement and yet have had few opportunities for exchange with one another. This community, in which all parties remain “uncertain about their identities” (Kwon), will collectively “domesticate” the 30sq m offered by the Museum. Inspired by Elif Shafak’s novel about a common house inhabited by a disparate group of women, they will produce, video/ tactile installations and soundscapes that reveal notions of “home” (phenomenological, narrative, virtual, mediated, imaginary) existing beyond the built materiality of a given space. In this “open home,” these women will create a space of “hospitality to the stranger.” Sharing such notions fuels the “work of imagination,” and through this project we hope to seed opportunities for nascent collectivities to emerge, becoming charters for new social projects.

Rather than offering an aesthetic apotheosis of the vernacular of banal cosmopolitanism, or situating women and cultural “otherness” in the realm of privacy where it is rendered “indiscernible, blurry or even invisible” (Papataxiarhis), the project seeks to reveal 21st century conditions of multiple belonging. We aim to disrupt insular conceptions of nationhood that have historically prevailed in Greece and elsewhere. 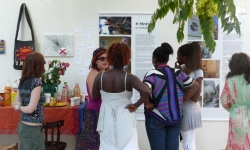 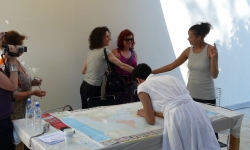 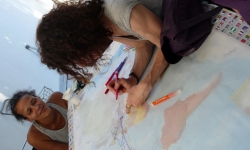