A live occupation of a building, in an emergency situation.

Fights for the right to housing and to the city of Athens. Participatory planning, construction of playground and plantings.

Location: between the buildings of the refugee housing complex.

The refugee housing complex was built in 1933-1935 to house refugees of 1922. They are eight apartment buildings (228 apartments), arranged successively and parallel to the axis of Alexandras Avenue. They are an architectural example of organized building blocks, because the architects Kimon Laskaris and Dimitris Kyriakos (officials of the Technical Department of the Ministry of Welfare) designed them according to modern trends, without any decoration trace. They tried to meet people’s needs in an emergency, offering them in minimum space the best circumstances of light, ventilation, outdoor and public spaces. It was from the beginning a live neighborhood. The collective memory of the city of Athens is expressed in the same buildings, as they stand there as a heterotopia, as a different space-time among government buildings, apartment buildings built with antiparochi system (the owner of a plot was compensated with apartments in lieu of payment for the land that he relinquished to the contactor who built an apartment block on it) and the stadium. The memories of December ’44 are carved on them with the marks of bullets, as many fighters of ELAS found shelter there, and the buildings were hit by the bullets of the British from Lycabettus hill. From early on, the neighborhood became part of gentrification projects. In 2001 the Public Real Estate Corporation with demolition threats bought 137 apartments and then another 40 – the rest are still owned by the residents. After great pressure, the Central Archaeological Council (KAS) declared in 2009, as we said, the buildings as scheduled buildings. The uninhabited apartments began to gradually be occupied by the displaced of the city: refugees, homeless, unemployed. For three years now, an assembly takes places every week. Also a bakery, a social solidarity clinic, collective kitchen, maintenance services and care for the patients are operating. The Refugee buildings are a centre of fight, self-organization, solidarity: between the visionary and the material reality, the concept of community is redefined as the neighborhood is transformed into a community.

… it is our duty, under the present circumstances, to defend the past and present of the refugee buildings as refugee lodging during the past and the present. To defend the people who live there. Any other opinions seem to ignore the current dynamic conditions. What would the benefit of a refugee museum when refugees themselves are living in it? The space-collective habitation-occupation constitutes a social and cultural workshop in the city of new spatial relationships and self-institution of the visionary community. The occupation is very important as it is the only neighborhood occupation in Athens, but also for its symbolic character. Definitely it will soon need to be defended many other times. New forms of action are required along with the residents, which ought to relate to their daily lives and to the problems regarding space.

In my opinion, what is needed are actions in order to make the community and occupation stronger against what is about to come. Actions to defend their right and not the right of some others regarding the inhabitation. To strengthen their right in the space and the city. (Excerpt from the text “the refugee buildings of Alexandras Street, a live occupation of housing in emergency situation”)

The playground was launched during the Antifascist Festival of Performing Arts from the “Snail” and the Nomadic Architecture. The idea was to construct it with recycled materials.

At first, two days ago we took a walk so as to gather materials. We almost immediately found tires in a garage behind Larissa station, George gave us the tires, he brought them to us in the afternoon in the refugee buildings. He told us that he did it because his wife’s family was refugees who once lived opposite the refugee building in the shacks. From there we bought the plants, opposite the Ikea, we had the same positive attitude. From September on he said he would get for us free plants since they were destined for the refugee buildings.

The procedure we followed was, during the first day to be with the children, mainly designing our ideas for the playground and playing, while in the second day to make a discussion with the assembly about the playground, planting trees, and a game with the tires and the ropes which we tried to give them the shape of a dragon…

Most children are 5-12 years old, there are about 40 children in the neighborhood, but 10-15 are those who daily move and play. They come from Afghanistan, Turkey, Iran, Syria, Gipsy-Bulragian. Most kids wanted a bicycle, a skateboard, few were the ones that wanted swings. Usually they played in the streets of refugee buildings and did not go to the playground that is relatively close. Many children work and do not go to school. Others go to a school far away. 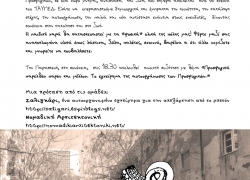 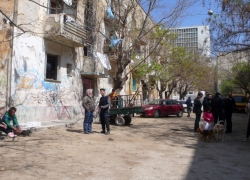 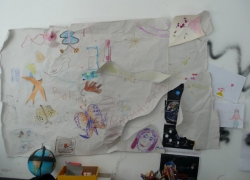