During the exhibition “Topographies, escape points”, presented from Sept 18 to Oct 5 at Artscape art space, at Moschonision Street where the Network Nomadic Architecture held its action -meeting “travelling- inhabiting Amerikis Square “. In this approach, the city is seen through the polymorphic relationships of the people who inhabit it. We are interested in the historical, emotional and social dimension of the space and the multiple ways in which our body exists, moves, is exposed, dwells in it.

Lefebvre[1] says: “The place is a political instrument manipulated with advisability although this advisability is hidden by the relevant appearances of that place.” The more alone people are in the city, the more vulnerable …that is why our action aims to “get together”. We started in the summer with wanderings in the region and discussions with the residents.

There was a research on finding information about the spaces in the area. We were interested in public places such as Amerikis Square, the old cinemas, the architecture of the area and the research of the Monumenta team, as there are remarkable architectural buildings in the area, among them the “tower” and the home of Lela Karagianni fighter, Aurevoir bar creation of Aristomenes Provelegios, and sites such as the occupation of Lela Karagiannis, Cyprus Park and Patision str. Afterwards, we interviewed residents trying to understand what is happening in the region.

On September 20th we turned the area of Artscape into “our own” place, an intimate space with carpets, pillows, fabrics, and we created an ephemeral spatial imaginary of co-belonging. The tea we made in the teapot with roses had herbs like cinnamon, laurel, carnation, balm. Teresa brought us spring roles as they are made in her homeland Sri Lanka, Christina made cake and Evgenia with Dimitris brought cookies. On the second day Georgia brought us coconut cake.

We told our stories regarding the neighborhood and its areas such as Cyprus and Patission park, the home of the fighter Lela Karagiannis, the cinema Studio, the Aurevoir, the Attikon cinema, the tower, Fokionos Negri, the closed houses, vacant shops and apartments, the multiculturalism of the neighborhood today. Many people talked about abandonment and fleeing to dwell in the suburbs, and for the present situation while some gradually return back. On September 21st at 11 am, we met in the same area with the kids, we spoke about the travels to other places and from other places to get to Athens, we explored and imagined the neighborhood together. The action – meeting aimed at the experience of cohabitation in the city and transcending the boundaries that become more and more powerful between us. The action was a form of support to the vulnerable living conditions of the city today, through the practice of meeting, participation and cohabitation. 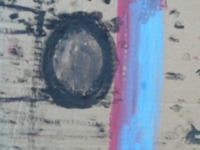 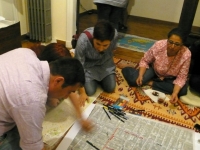 [1] Henri Lefebvre «space and politics” page 206, the right to the city