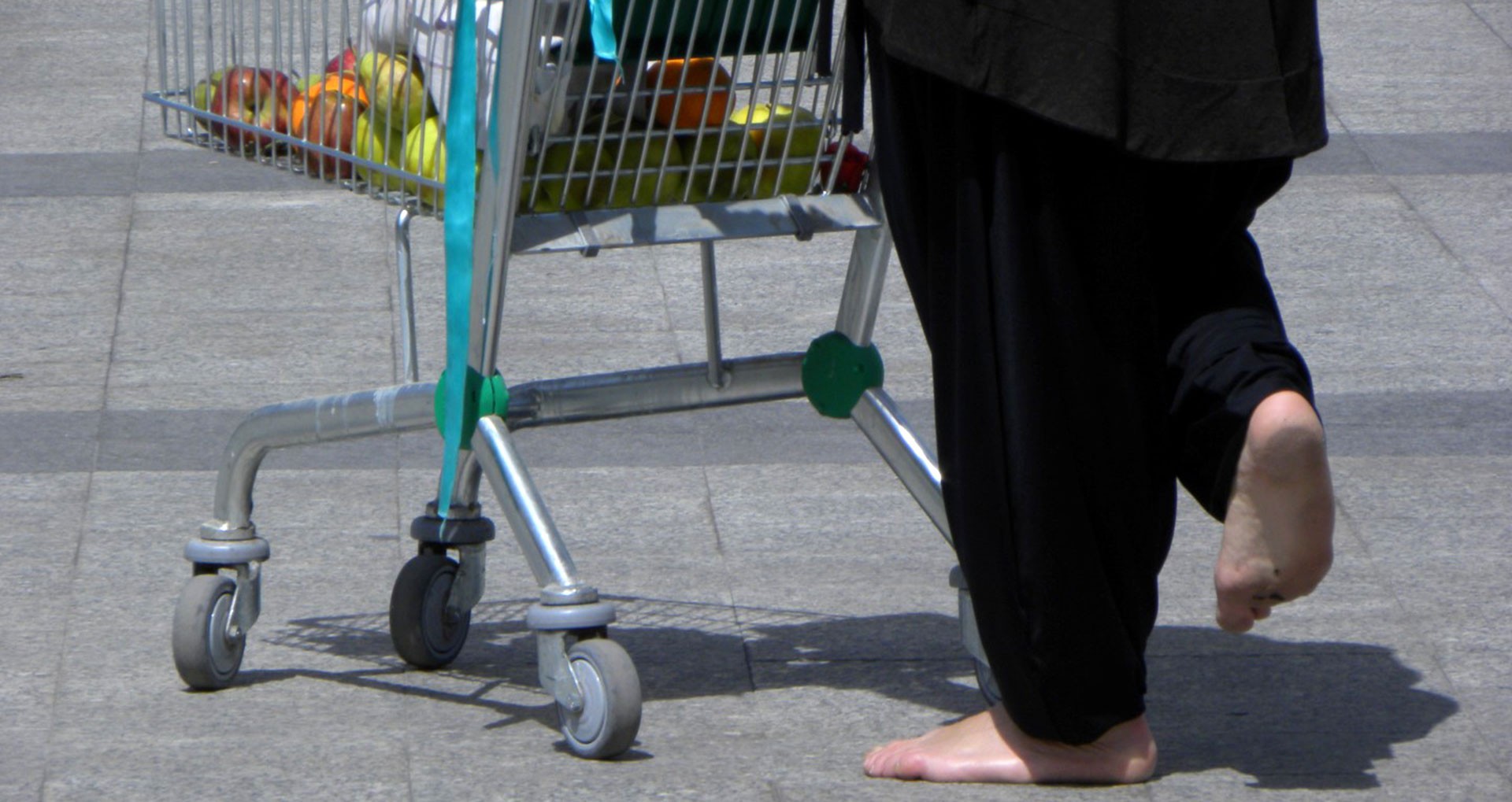 The action “the shopping cart“, action about the human condition, was part of the happening-conversation “Athens in Trans-IT-ion! Athens: A city in transition? ” Organized by the theorist of art and culture Eva Kekou in the CAMP (Contemporary Art Meeting Point) which is located at the square.

Memory. Kotzia Square or Loudovikos Square or National Resistance Square is a historic square in Athens, with important urban buildings such as the Mela building standing on the corner of Aeolus and Kratinos Street, where it used to be the Municipal Theatre designed by Ziller, which had hosted 150 families of refugees, and was demolished in 1933 by the Mayor Kotzia, while the trees of the square were a key element of its aesthetics.

Urban Void. Today it is just an Urban Void as there is only a gray pavement without trees, benches, or any interventions. Today’s square was formed in 2004, too hastily, without an architectural competition or study, and its architecture does not make the stay in the square pleasant. It is mainly a meeting point of immigrants, drug users and passers-by headed to the near-by shops. On Saturday, at the side of Aeolus Street a jewelry bazaar is held. Interesting and timeless elements of the square are the two cafes. Wandering around with a shopping cart. This is about wandering around with a shopping cart full of fruit which we share with people at the square. It is a symbolic gesture, reminder of an intense situation that anyone can easily observe lately in the urban landscape of Athens. Immigrants with carts, moving among us and headed to the trash cans from where they collect metals and paper. They are mainly dark-skinned men – there are also very few women from Sri Lanka, Bangladesh, Africa. They travel very long distances to end up in Petrou Ralli street where they sell their merchandise by the kilo. They are the ones who, with great effort, through hunger and conditions of abandonment, recycle in Athens to earn some money…

Steps. Route. I push an empty shopping cart to Athinas street, and I fill it with fruit from the Central Market, and then offer them to those I meet in Kotzia square. The body. My body is penetrated, shaken while pushing the shopping cart, by the frequency of the ground, asphalt, slabs, blocks. The frequencies change, the sound of the cart and the body movement are coordinated. The body bends forward, stretched, shaken… my back hurts, I take off my shoes, I walk barefoot in the square. My bare feet come into direct contact with the ground.

The Gift. I offer the fruit to immigrants who talk to each other, immigrants with carts crossing the square, lonely people walking up and down, to the parking guard, women with their children feeding the pigeons, drug users who are sitting next to bodies lying on the grass, jewelry sellers. I read the poem “Carts up and down in our city.” Also, the poem of Mayakovsky “Cloud with trousers” was read, the poem was read by jewelry sellers and Eva Kekou.

A conversation that took place in the CAMP followed. 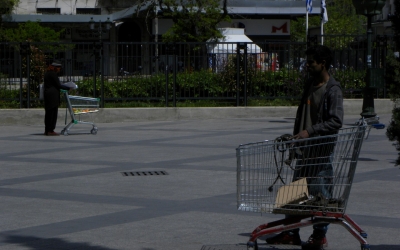 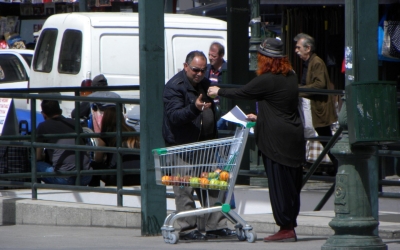